When the East German region of Thuringia confirms its next state premier in the next few weeks, it is likely to be a landmark in postwar history.

Contender Bodo Ramelow, 58, is a former trade unionist and a member of Die Linke (the Left party), successors to East Germany’s communist rulers, the Socialist Unity party (SED). If the Social Democrats and Green party back him, he will become Germany’s first socialist state premier.

Inevitably, some opposition politicians have sounded the alarm. Before the elections, chancellor Angela Merkel warned voters not to “let Karl Marx back into the state premier’s office”. The tabloid Bild lamented that putting Ramelow in charge was tantamount to mocking the victims of the old German Democratic Republic (GDR) regime.

Yet for the most part, reaction in Germany has been surprisingly relaxed. “Since 1989, we have slowly come to realise that not all members of SED were bent on world revolution,” said political scientist Werner Patzelt, a member of Merkel’s Christian Democrats.

“Some of them are just level-headed and hard-working politicians,” he added.

Twenty-five years after the fall of the Berlin Wall, the Left party’s ascendancy in Thuringia is the clearest sign yet that German views on the GDR legacy are becoming more pragmatic and less ideological.

The common view of post-wall Germany is that what had been presented as a reunification became a de facto annexation. West Germany was only prepared to incorporate the five eastern regions on its own terms: East German social models and structures were considered dysfunctional or outmoded – the west had all the answers.

But a closer look at the fabric of Germany in 2014 reveals a country that is more East German than it likes to admit.

Football provides the most obvious example. In Real Madrid midfielder Toni Kroos, Germany’s World Cup-winning squad may have only had one player born in the GDR. Yet the team’s success was largely built on the kind of 10-year plan more common in GDR-style planned economies.

Heinz Werner, a former coach at Hansa Rostock and Union Berlin, said he was dismayed when, after the fall of the wall, he discovered just how little West Germans invested in their players. When Werner raised the issue at the German FA’s annual conference in 1992, he was jeered.

“They told me that training up young players took too much time. ‘We can just buy players when we need them,’ they said.”

But after poor performances at tournaments in 1998 and 2000, the westerners came around to Werner’s thinking.

In 2002, elite football schools were established nationwide, and Bundesliga clubs were forced to set up their own academies. Twelve years later one of the products of the new system, midfielder Mario Götze, scored the winner against Argentina.

Germany is also becoming more East German in its attitudes towards women in the workplace. From a contemporary perspective, GDR state policy looks surprisingly progressive in this regard, even if the reality rarely matched the projected image: East German women got the right to choose their workplace without their husband’s consent in 1950, 27 years before those in the west.

In the early 1980s, more than 90% of East German mothers were recorded as working mothers.

The state provided special university courses for women, generous maternity leave and a comprehensive network of nurseries, even if social attitudes often remained behind the times: housework was still considered a female domain, a state-decreed monthly “household day” off work only available to women.

Today the percentage of working mothers remains higher in the east than in the west. The wage gap between males and females in eastern regions is only 8%, compared with 23% in the west. Every second child below the age of three is looked after in daycare nurseries rather than at home, compared with only every fourth in the old west.

But Germany as a whole is slowly catching up with the east: daycare nurseries have expanded considerably under Merkel.

In March 2014, 662,000 German children under the age of three were looked after in the nurseries.

Hildegard Nickel, a sociologist at Berlin’s Humboldt university, recalled how some policymakers were genuinely trying to combat Germany’s high unemployment after reunification by driving East German women out of the workplace.

“People were making that case in serious academic debates,” she said. “If you suggested increasing the number of nursery places, you’d be criticised for evoking the spectre of communism. Nowadays everyone can legally claim their nursery place. There’s not even a discussion about it.”

Yet openly acknowledging a debt to East German ideas often remains a taboo: in press material, the German FA cites youth training structures in small countries like Holland as an inspiration.

When Germany introduced a bottle deposit system to encourage recycling in 2002, it pointed towards Scandinavia, even though East Germany had a sophisticated recycling infrastructure since the 1960s.

Sometimes, it can verge on denial: when poor results in OECD school rankings led to call for reforms of Germany’s education system at the turn of the millennium, a delegation was sent to Helsinki to study Finland’s top-ranking system. The Finns told them that they, in turn, had taken their inspiration from East Germany.

Developments in Germany’s healthcare system demonstrate that learning from the east does not automatically amount to a revival of its ideological values. In East Germany, a large part of healthcare was provided by polikliniken (polyclinics): state-funded outpatients centres in which GPs shared a roof with specialists. In the west’s private healthcare system, on the other hand, doctors were self-employed and ran their own practices.

After the Wall’s fall, polyclinics were phased out and East German doctors were made to go freelance. Only in Brandenburg and East Berlin were a few specialists allowed to continue working in the old centres.

But a reform of the healthcare system in 2003 has spawned a revival of the old polyclinic structures: increasingly practitioners are once again housed together in so-called Medical Supply Centres (MVZs).

Centres such as the one in Bad Belzig, Brandenburg, were once considered old-fashioned – now they might point the way to the future. In a rural area with low population density, this MVZ conveniently groups together a GP, a surgeon, a radiologist, a gynaecologist, an oncologist and an optician – doctors share office space, medical equipment and expertise.

“What we are seeing now is that there were some structural advantages to the East German model,” said Hans-Joachim Helming, head of the Brandenburg doctors’ association.

“If a GP had a problem, they could just walk to the end of the corridor and ask a specialist. Always fighting for yourself can wear you out – working as a team is useful.”

At any rate, mere Ostalgie – or nostalgia for the east – does not explain the polyclinic revival: out of 2,000 MVZs in Germany today, most are based in the old west, with 393 in Bavaria alone.

Doctors are keen to stress the difference to the East German model: unlike the old polyclinics, MVZs are run on market-led principles, and many doctors start their own centres because it allows them to be more competitive. 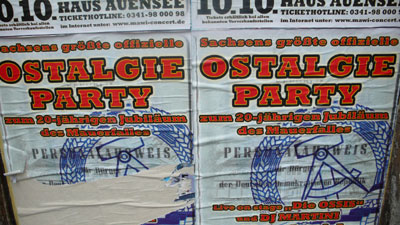